Though not officially formed as a group until 2005, the crew came together in 2001 while touring together on Masta Ace‘s Disposable Arts tour. Ace described the group’s formation in an interview:“It came about back in 2001, I went on tour to promote my album Disposable Arts and on that tour I travel with Strick. Strick was from Milwaukee, where we found Tommy Boy at the time. And I also travel with Punchline. We ride on the road for about a month or so, we really just got to liking each other and over the course of the last 5 years we collaborated together on a lot of different records. You know, whether it be me and Strick or me and Words. Or Words and Strick. Or Punch and me. We just done so many different collaborations. I mean probably some in the area of 20 different records. That one, or two, or three of us had been on together. That one of us has been on a record that they done with me on my album and it just seems like the right thing to do. Also like some of the fan-sites it was kinda being spoken about before it was actually a reality. It became like a rumor. People was just like “Yo” and started putting it in the chatrooms that we was forming a group and at the time it wasn’t even true and then we started talking about “yo, maybe this is a good idea, let’s think about it.” That’s how it came about.”

In 2006, the group’s first collaborative track was released online, titled “Four Brothers”. eMC’s first group effort, The Show was released on iTunes on February 26th, and the CD release was on March 25th. A single from the album, “What It Stand For”, was released in July 2007, and is available for free download on the group’s MySpace page. It features production from Nicolay.

Advance tickets are available for only $10! 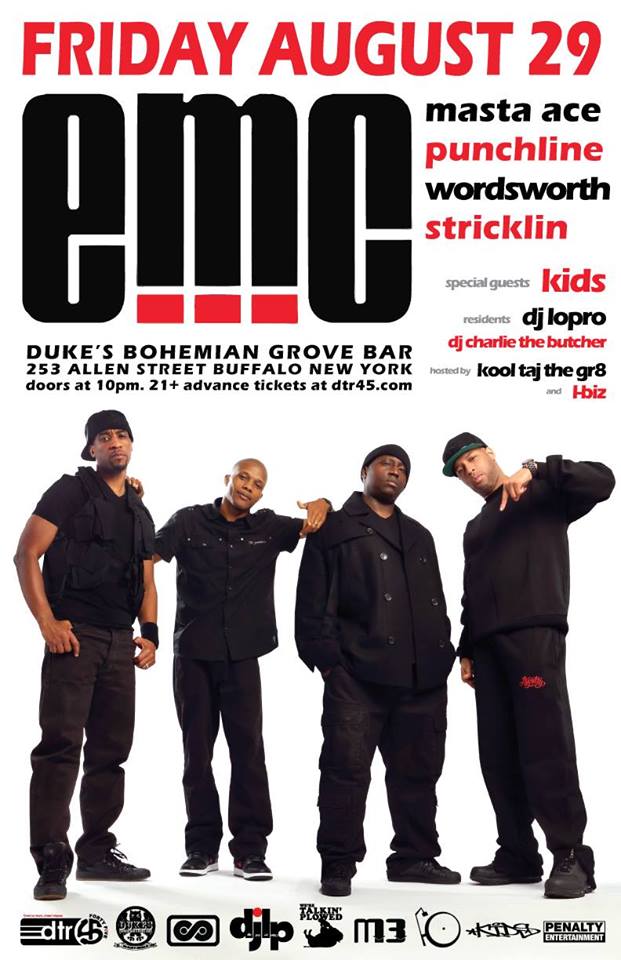